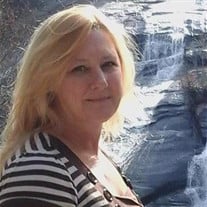 Catherine Ann Ulrich, age 56, passed away peacefully on May 30th, 2019 in Tallahassee, Florida after a nine-month battle with cancer. Cathy was born on May 25, 1963 in Columbia, Missouri to Margaret and Raymond Harden.She was confirmed in the First United Methodist Church in Perry, Iowa and attended school in Perry Community Schools and graduated from Perry High School in 1981. She continued her education at Des Moines Area Community College and earned a degree in nursing. She spent most of her career working with the elderly in long term care. She began working in this field when she was a junior in high school at a Perry nursing home and worked as a long-term nurse for 38 years. Her last place of employment was at Westminster Oaks nursing home in Tallahassee, Florida. Catherine was united in marriage to Thomas J. Ulrich on October 13, 1990 at the First United Methodist Church in Perry, Iowa. Their only child, Mikayla Jo, was born on September 9, 1994 in Tucson, Arizona. The family moved to Florida in 2011 and lived on an acreage north of Tallahassee. Cathy was a lover of animals and the outdoors. She got her first pony when she was five years old and she owned horses until her mid-thirties. She had many pets over the years. She owned dogs, cats, chickens, rabbits, goats, parrots, snakes, and tropical fish. Catherine was a board member of the Friends of Fort Defiance State Park in Estherville, Iowa and did frequent volunteer work there. Cathy loved gardening, camping, fishing, and canoeing on rivers of Iowa and Florida. Cathy was preceded in death by her sister Cynthia Schuler and her grandparents. She is survived by her parents Raymond and Margaret Harden, her sister Christine Hayden, her husband Thomas Ulrich, her daughter Mikayla Ulrich, and her relatives in the Ulrich family. In lieu of flowers memorials may be given in her name to the Sloan Kettering Cancer Institute, Friends of Fort Defiance State Park, or the Raccoon River Pet Rescue Project in Perry. A celebration of her life and her burial will be held in Perry, Iowa at a later date. The Carris Family Funeral Home in Perry, Iowa will be in charge of those arrangements.

Catherine Ann Ulrich, age 56, passed away peacefully on May 30th, 2019 in Tallahassee, Florida after a nine-month battle with cancer. Cathy was born on May 25, 1963 in Columbia, Missouri to Margaret and Raymond Harden.She was confirmed in the... View Obituary & Service Information

The family of Catherine Ann Ulrich created this Life Tributes page to make it easy to share your memories.

Catherine Ann Ulrich, age 56, passed away peacefully on May 30th,...