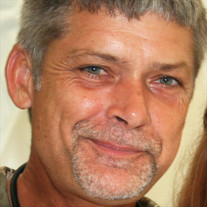 Bradford Clay Lewis, age 59, passed away on Thursday, February 07, 2019 following an eleven year battle with cancer. He was at home surrounded by those he loved when God took him home to give him rest. Brad was born on July 01, 1959 to Dan and Jean Lewis. He attended Suwannee High School and graduated in 1977, after which he signed up for (and served as a sergeant in) the United States Marine Corp Reserves – following proudly in his father’s footsteps. He married in 1984, and remained married to Amy Boatright Lewis for over 34 years. He was co-owner of several Live Oak based businesses including Suwannee Salvage. Up until his cancer diagnosis in 2008, he owned and operated a successful exotic animal business through which he sold animals to such places as Disney’s Animal Kingdom and Wild Adventures theme parks, among others. Brad coached soccer at many levels for almost 20 years, and loved playing as well. In sports, as in business, he worked hard and his actions were always guided by integrity, fairness and kind heartedness. Brad was most proud of his son, Lincoln. Brad cherished and enjoyed nothing more than spending time with him - laughing and teasing. He was also very proud of his sweet daughter-in-law, Elizabeth Bryan Lewis. Brad enjoyed the simpler things in life, and never liked being in the spotlight or being “acknowledged” for his numerous good deeds. Just knowing he had helped someone in a meaningful way was enough for him. It was the essence of who Brad was. He is preceded in death by his father, Leroy D. Lewis, Sr. and mother, Jean Armbruster Lewis. He is survived by his wife, Amy B. Lewis, his son Lincoln Lewis, and daughter-in-law Elizabeth Bryan Lewis. There will be a very private ceremony to spread Brad’s ashes. If you would like to pay your respects, or make a donation to one of his favorite causes, please visit www.BradLewisMemorial.com. We ask earnestly while there you leave a private memory (or memories) of something Brad did for you or what he has meant to you. We are creating a Memory Book of who Brad was, and this will mean so much to our family…and would have meant the world to Brad as well!

Bradford Clay Lewis, age 59, passed away on Thursday, February 07, 2019 following an eleven year battle with cancer. He was at home surrounded by those he loved when God took him home to give him rest. Brad was born on July 01, 1959 to Dan... View Obituary & Service Information

The family of Bradford Clay Lewis created this Life Tributes page to make it easy to share your memories.