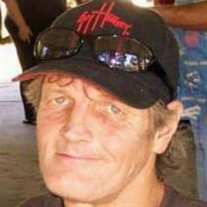 Robert "Bobby" Lee Richards 56, of Havana, went home to be with our Lord and Savior in the early morning hours of Friday, September 4, 2020, at his home in Havana, FL, in the presence of his loved ones. Bobby was born December 21, 1963. He spent the majority of his working years on a shrimp boat, which fulfilled his passion of working outdoors in nature. He would often share pictures of beautiful sunrises and sunsets, along with sea creatures that he would encounter while out on the open sea, with family and friends. Bobby enjoyed sports, especially football and those Alabama Crimson Tides, which sometimes caused somewhat of a ruckes with others whom were devoted to other teams. But all was in just good fun. Bobby also enjoyed vacations with his family whenever he was able to come along. The mountain trips were among his favorites. He loved his family and friends so much, often it was hard to tell the difference between the two, because so many became like family to him, and he made sure everyone knew he loved them. When Bobby was around, you could always count on a belly laugh or an eye roll from things he would do or say. Bobby is survived by his mother Dorothy Johnson of Chipley FL, Sister(s) Teresa Saunders (Byron) of Tallahassee, FL, Ronda Bryan (Wayne) of Tallahassee FL, Sherry Jones of Quincy FL, Brother(s) Steve Vann of Alford, FL, Arnie Richards of Cherryville NC, as well as bucket loads of aunts, uncles, cousins, nieces, and nephews. Bobby is preceded in death by his mother, Mollie Willis Richards, Father(s) Leonard "Bud" Richards and Robert Strickland, as well as his niece, Britny Richards Peacock in which he referred to as his special Angel. Bobby will be missed terribly by those that loved him. A graveside service will be held at 10:00am on Wednesday, September 9, 2020 at Concord Cemetery in Havana. Lifesong (850/627-1111) is assisting the family with arrangements. Rest in peace - Roll Tide

Robert "Bobby" Lee Richards 56, of Havana, went home to be with our Lord and Savior in the early morning hours of Friday, September 4, 2020, at his home in Havana, FL, in the presence of his loved ones. Bobby was born December 21, 1963. He... View Obituary & Service Information

The family of Bobby Lee Richards created this Life Tributes page to make it easy to share your memories.

Robert &quot;Bobby&quot; Lee Richards 56, of Havana, went home to be with...