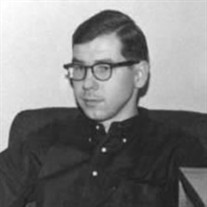 Benjamin Maston Birchfield, 83, of Tallahassee, passed away on September 10, 2020. He was born December 15, 1936, in Mayo, FL. He was the son of William O. Birchfield, Sr., a pharmacist, and Mary Eva McCall Birchfield, an educator. Ben received a B.A. in Physics from Florida State University in 1959 and enjoyed a long civil service career at the Johnsville Naval Air Station near Philadelphia, PA, specializing in unmanned aircraft and other aeronautical defense projects. Ben held strong interests both in the sciences and the humanities. He was a lifelong student, reading in military and political history, automotive and aviation history and engineering, carpentry, and computer science. He was devoted to classical music and photography. He also enjoyed art, acquiring an occasional fine print. In early years he was an enthusiast for the outdoors and enjoyed hunting, fishing, swimming, boating, and camping. His retirement dream was to build a solar house in the mountains of North Carolina. Ben was agreeably social and maintained a circle of close friends over his lifetime. In retirement Ben returned to Tallahassee where he especially enjoyed the friendship of the Helton family, including his niece Mary Anne, her husband Joe, and their children Jay and Sarah. Ben is also survived by two brothers, Hal F. B. Birchfield of Miami, FL, and James de Maris Birchfield of Lexington, KY, as well as niece Meg Birchfield of Azle, TX, and nephews Bill Birchfield of McLean, VA, and Frank Birchfield of Jacksonville, FL. He was predeceased by his brother W. O. Birchfield, Jr., of Jacksonville, FL. Service arrangements will be made at a later date.

Benjamin Maston Birchfield, 83, of Tallahassee, passed away on September 10, 2020. He was born December 15, 1936, in Mayo, FL. He was the son of William O. Birchfield, Sr., a pharmacist, and Mary Eva McCall Birchfield, an educator.... View Obituary & Service Information

The family of Benjamin Maston Birchfield created this Life Tributes page to make it easy to share your memories.

Benjamin Maston Birchfield, 83, of Tallahassee, passed away on...