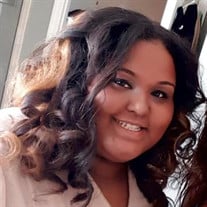 Ajzonee Mya Williams, 21, of Tallahassee passed away on August 12, 2021 at Tallahassee Memorial Hospital. Ajzonee was born in Staten Island, New York on April 18, 2000 and then moved to Tallahassee with her family when she was only six weeks old. Her first church home was with Elizabeth Popular Spring Baptist where she served faithfully in the youth department and sang in the Youth Choir. Ajzonee was a devout Christian and continued her Christian journey at New Bethlehem Church where she became a member and continued to work with the youth department. Ajzonee continued to bless us with her voice as she became a member of her beautiful choir at New Bethlehem. She was extremely funny, loved everyone and looked past one's flaws to see the best in all. Ajzonee graduated from Leon High School in 2018. While attending Leon High School Ajzonee loved theater and that is where her love of theater began. Her senior year she began directing and was inducted into the International Thespian Society. Ajzonee also loved to play the steel drums with Leon Steel. Ajzonee was currently a student at TCC and was set to graduate December 2021. She planned to move to FAMU and dual major in pharmaceutical sciences and theater. She was currently employed as a transporter at Tallahassee Memorial Healthcare. Ajzonee was an avid fisherman and she would always catch her uncles bait. Survivors include her parents, Michael and Talina Williams, Jr. of Tallahassee; her siblings, Kaylan, Trinity and Michael Williams; maternal grandparents, Mary Burns and Sam White; paternal grandmother, Roberta Dixon; her godparents and Aunt and Uncle, Stacey and Monique Thompson; uncles, Samuel White, III; Justin White (Amanda); Jason Dixon (Shawnae); Anthony Dixon; Edward Dixon (Virginia); Mark White; and Carlos White; aunts, Ebony Newsome-Wright and Tiffany Hundley; close cousins, Natallie Thompson; Tevon Thompson; Shaja Thompson; Rebecca Thompson (Christian); Janayah Gustus; Javanughn Wright; Jahvon Flanders; and Isaiah Dixon; one godson, Christian Tarrant, Jr.; and a host of other cousins and family members. Ajzonee was preceded in death by her paternal grandfather, Michael A. Williams, Sr. Due to Covid, a private memorial service will be held at 11:00 AM on Saturday, August 21st at Deer Lake United Methodist Church with Pastor Joseph Johnson, Sr. officiating. The service will be livestreamed through YouTube at https://youtu.be/SJkgbL_4Ch4. In lieu of flowers the family requests donations be made online to the International Thespian Scholarship Society, www.myedta.schooltheatre.org. Lifesong Funerals & Cremations of Tallahassee (lifesongfunerals.com or 850/765-3190) is assisting the family with arrangements.

Ajzonee Mya Williams, 21, of Tallahassee passed away on August 12, 2021 at Tallahassee Memorial Hospital. Ajzonee was born in Staten Island, New York on April 18, 2000 and then moved to Tallahassee with her family when she was only six weeks... View Obituary & Service Information

The family of Ajzonee Mya Williams created this Life Tributes page to make it easy to share your memories.

Ajzonee Mya Williams, 21, of Tallahassee passed away on August...